October 05, 2020
Coffee, cocktails, and brunch in a light and roomy setting. A stones throw from Hove lawns, yet away from the hustle and bustle. 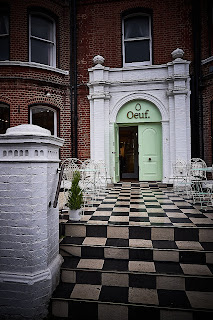 Oeuf is a new café on Third Avenue in Hove. I can't remember where I heard this, but apparently it is Wes Anderson inspired. It certainly has a bright colour palette that wouldn't look out of place in one of his films. With great outdoor areas for when the weather is better. We had a bit of a nightmare getting there - with a dog rolling in mud and me locking myself out of the house without a phone or coat ... but we got there in the end, ready for some food!
We sat in the dining room, but they also have a café bar area for a relaxed drink. Plus an onsite florist, so you can pick up some blooms on your way home! 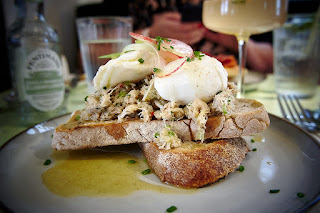 I had the "Oeuf. & Surf" - A good portion of fresh Crab on Sourdough drizzled with Brown Butter Sauce and topped With two poached eggs. I had decided that this was what I wanted earlier in the week after hearing about the menu, when it was a bit warmer! I'm a bit of a monster for sauce, so would have like a little bit more or maybe one of the dishes with Hollandaise Sauce.
After I started seeing food arrive I started to get menu envy :-) Next time I go in the winter I'll probably order the "Chorizo & Peppers" from the skillet menu or the "Breakfast Burger" a 4oz Beef Burger, Bacon Jam, Fried Free Range Egg, Local Sausage, Cheddar, Brioche Bun, Sausage Patty & Homemade Rosti. 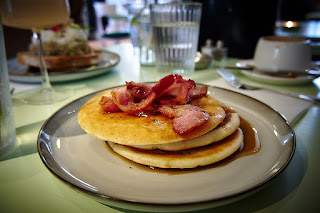 G had the Bacon Pancakes - which unsurprising is a stack of Pancakes with Sussex Bacon & Maple Syrup. I had a taste of the pancakes and they were tasty. Extra maple syrup was ordered ... because it is a Sunday treat and why not? The bacon looked nice and thickly cut.

For drinks we had coffee, which was nice, creamy and rich. The coffee wasn't a) burnt and also avoided b) the "flavoured milk shake" that is my other pet peeve. This is as good a coffee as I've had in Brighton. The coffee comes from a roaster around the corner, and so local that it is delivered by bicycle.
I also ordered the "Bee Breezy" (pic below) from the Mimosas menu. Alongside the Prosecco this had grapefruit, pear, and honey. I wasn't a fan, but I put that down to really wanting a Bellini. I should have gone for the Classico, a classic mimosa with orange juice, or a "Fizzy Ellie" with Elderflower and Mint. Two classic flavours that I love. 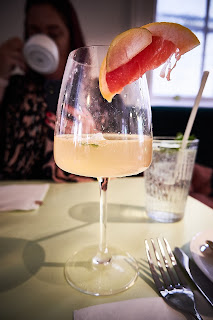 I will leave you with a joke ... why do the French only have one egg for breakfast? Because in France one egg is un oeuf. 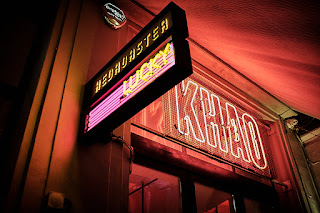 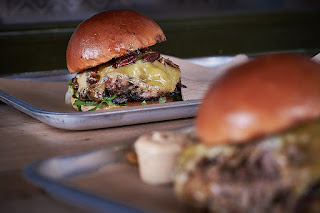